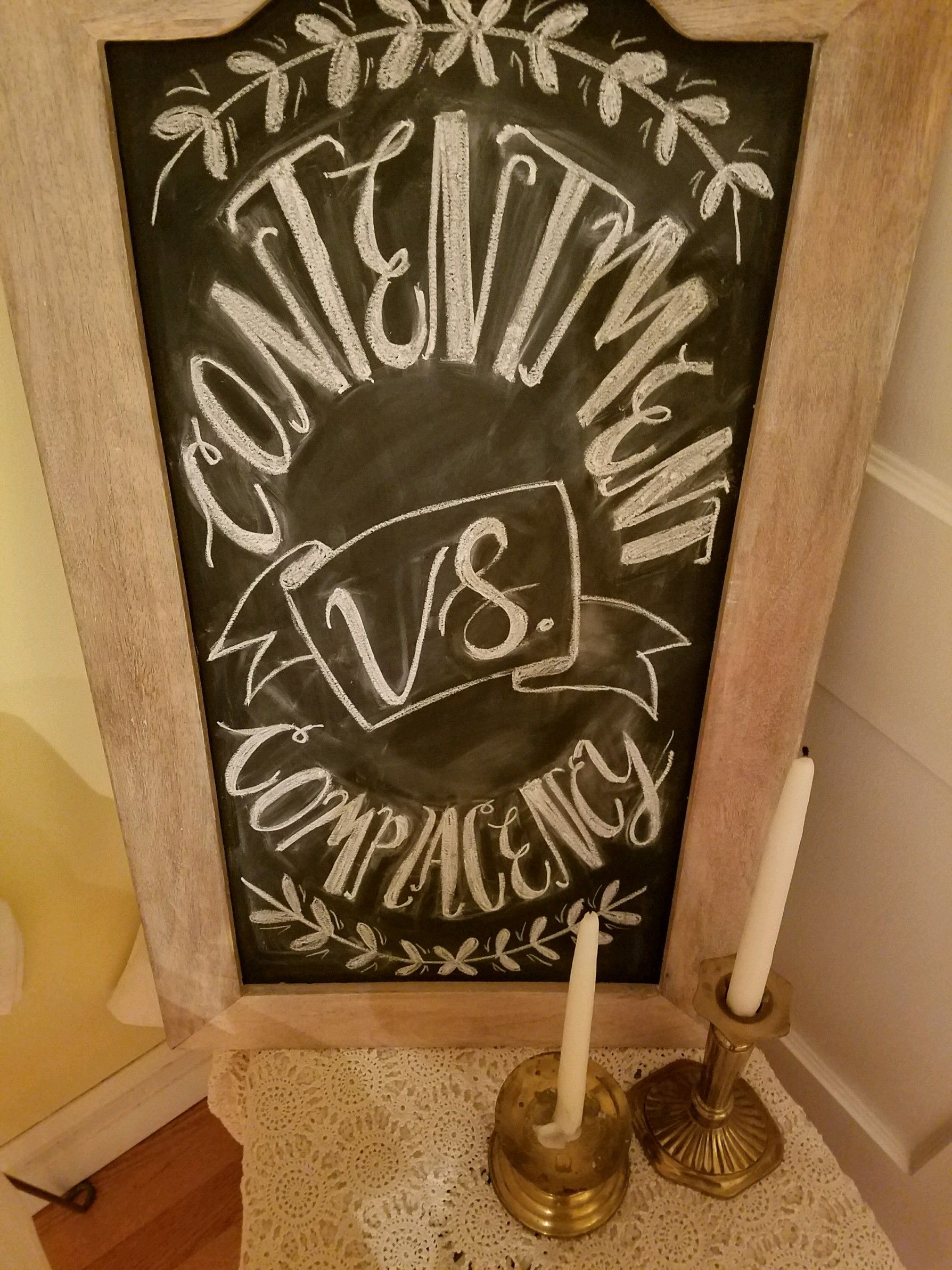 “Say the first word that comes to mind when you hear the word ‘contentment.’” That was the introductory task women were given at the recent Women’s Thrive taught by Courtney Klingler. Women’s responses ranged from “satisfaction” and “peace” to “churchy” and even “unattainable.”

In this world of not only suffering and hardship but also endless options, decision fatigue, and snippets of others’ seemingly perfect lives on the screens living in our pockets 24/7, it can seem impossible to be content. We constantly hear messages to accumulate more stuff, achieve a higher status, be a better person, work harder, and on and on. It can feel like nothing is ever enough. No wonder we might think of contentment as unattainable!

However, it is not only the external pressures of the world that lead to discontentment. We ourselves often work against our own peace and satisfaction. Women discovered that our reflex reactions to life are often in opposition to contentment. We tend instead towards complaining, controlling, comparing, complacency, and condemnation.

Thankfully, the Thrive didn’t end there! The key verse the women studied was Philippians 4:11-13:

Not that I am speaking of being in need, for I have learned in whatever situation I am to be content. I know how to be brought low, and I know how to abound. In any and every circumstance, I have learned the secret of facing plenty and hunger, abundance and need. I can do all things through Him who strengthens me.

Here, Paul speaks of contentment as a secret to be learned. Courtney summarized this secret as, “Finding my ultimate satisfaction in Christ alone and facing each and every circumstance with His strength.”

Knowing that secret is one thing, but it is harder to put it into practice. So, women explored some practical ways to proactively pursue contentment in Christ – by taking off those reflex reactions mentioned above and instead responding with gratitude, trusting in God, finding our security in Jesus, being humble, persevering in doing good, and extending forgiveness to ourselves and others.

Most importantly, Courtney reminded the women that while all those practical steps are good and helpful, we are not meant to make contentment just another box to check or some way to earn God’s favor. Rather, Jesus is our focus and our only hope for finding contentment. If we chase after contentment as our end goal, we can fall into making contentment an idol and end up back where we started – discontent, dissatisfied, and discouraged.

I personally had that experience recently. Before 2017 started, I decided to pick a word as a sort of theme for the new year. Funnily enough, I chose “contentment.” I put it at the top of the daily to-do list I keep on my computer, along with ideas about how to pursue contentment. But it seemed like the more I chased after contentment, the less content I felt. I was frustrated with myself for not being able to achieve this goal and felt like I was failing at being a “good Christian.” I believed a lie that I could somehow muster up contentment on my own, when the truth is that we really do need someone outside of ourselves – namely Jesus – to satisfy us. I had forgotten that contentment wasn’t the primary target. Jesus is. He is the one who satisfies and strengthens us.

That is why I was so grateful for the last question the women discussed: “Why is it absolutely critical to remember the gospel in light of ‘practicing contentment’? What will happen if we lose sight of His provision and power?” We ended the morning fixing our eyes on Jesus – the one who was forsaken so that we never would be, so that we could find peace, rest, and ultimate satisfaction in our God.