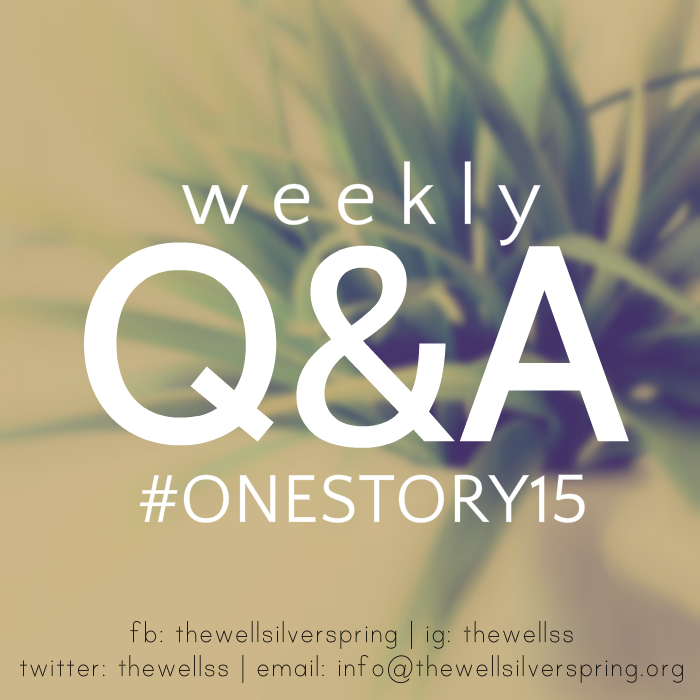 During our One Story series, we will do online Q&A's each week to supplement your study of the OT as you follow along the Summer Bible Reading Plan. I encourage you to stick with the reading plan and ask questions that arise in your 3D groups and Community. Reading the Scriptures ought to be an individual and communal activity.

We had one question from last week:

Question: In Genesis 1 and 2 there are two seemingly different accounts of creation-- and several convincing arguments on the Internet. Where does the Well stand on why these accounts differ? And why?

Answer: That's a great question which shows you're really paying attention and getting at the text! To address your question, I will answer directly and then provide additional information about creation interpretations to guide you in your thinking and further study.

In Genesis 1, we are given a chronological account of all creation. While it seems as if Genesis 2 gives another chronological account of all creation (understandably so!), I believe this is a misunderstanding. In Genesis 2, we are given a zoomed-in focus of Day 6, the creation of man, and the events of that day. Therefore, when the author speaks of the formation of trees (Gen 2:9) and creatures (Gen 2:19), he is referencing what God already 'had formed' (Gen 2:19) in earlier days.

Therefore, Genesis 1 and 2 are consistent and there is no contradiction of chronology.

To start off, please do keep the following in mind while interpreting the creation account of Genesis chapters one and two (glad for your questions! #ONESTORY15).

Now, here is a too short, too broad, simplistic summary of major orthodox readings of Genesis 1-3 (creation + fall) to guide us on the right path of understanding and to encourage further study. Each of the below summary categories has varying scopes and interpretations within the chosen reading, and each has its own strengths and weaknesses.

We find orthodox Christian theologians and many within our own leadership that read the creation story in one or a blend of these interpretations. The Well has chosen not to take a hard stance on the way one must read the creation account, because we find various arguable interpretations which lead to orthodox truths. Minimally, the core truths translated in the creation account are clear: God is separate, over and above creation; God created everything out of nothing; God is intimately involved in creation and His ongoing relationship with His creation; events are ordered and intentional, climaxing in men/women and the Sabbath rest; men and women are created in God’s image.

Where are we to go from here? First, we are to the hard work of reading well, together. We read in community with believers in our current context and those from our historically orthodox past. Second, continue seeking understanding motivated by faith. We trust in the God of the Bible who has rescued us through the work of His Son. We know we can trust Him and His words are true, so we seek to diligently understand who He is, as He has revealed Himself in His word.

Thanks for providing additional details to this answer. This reading plan is really pushing me to really think about what I say I believe & why. It's like I'm looking at my family tree, but on a date line and how I'm part of this story both in a biological & spiritual context. ❤

Linger with God This Fall

Summer in the Psalms: Confession

You Don't Have What It Takes

What does my Community have to do with Church Planting?

New Relationship with God - Next Steps to Grow

Part 2 | After Ferguson: What do we do? by Matt Klingler

Upcoming Series: Before The Fall

Should I Get Baptized?

Jesus Prays for You

Nuts and Bolts of Confession

Help Stage Our House To Sell!